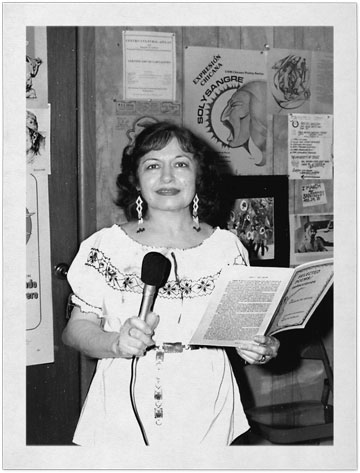 Angela de Hoyos was a Chicana, poet, author, songwriter and artist active during the 1960’s through the 1980’s in San Antonio, Texas. Born in Coahuila, Mexico she came to the United States as a child with her family. She graduated from Fox Tech High School during the 1940’s and worked as dressmaker. This career is credited with sparking her creative and artistic interests, and through which she met her husband Moises Sandoval whom she married in 1954.

Many of the works of Angela de Hoyos feature feminism, gender, self-reliance, and Chicana philosophy as dominant themes. Throughout her career, she met and mentored prominent Chicana poets and writers in the San Antonio area such as Carmen Tafolla, Evangelina Vigil, and Norma Cantú, many of whose works were published under the printing company owned by her and her husband, M&A Editions. In 2009 she passed away, leaving behind a prolific literary and artistic legacy through which she gained the posthumous sobriquet Poeta del Pueblo.

In the fall of 2021 Moises Sandoval, the husband of Angela de Hoyos, donated materials related to her career as a Chicana author and artist to the Center for Mexican American Studies and Research at Our Lady of the Lake University, under the auspices of Dr. Aimee Villarreal where it currently resides. Joseph de León, CMASR staff and Samuel Delgado, student intern, contributed to the creation of this inventory.